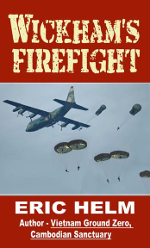 But with changes in global politics the covert facility was reborn. At the southern end of the runway, immediately adjacent to the recently refurbished hangar where the C-130-J was parked, resided a newly constructed isolation compound. Whitewashed concrete block buildings were surrounded by razor sharp concertina wire reflecting shiny and bright in the South Florida sunshine. The outside perimeter was patrolled by trigger-happy rent-a-cops riding around on four-wheel, camo-painted ATVs. The cops were just itching to set free their vicious dogs on anyone stupid enough to ignore the warning signs:

US Government Property No Trespassing

Nestled inside the five-acre barbed wire enclosed compound Wickham and five other men were isolated from the outside world. No one came in. No one went out. There were no cell phones, no land lines and no radios. In isolation Wickham and his team meticulously planned the details of the assassination.