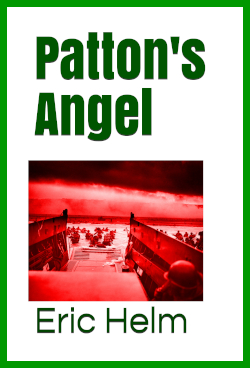 This story, based on true events, chronicles Sergeant Mick Angell's bloody combat crusade against the Wermacht during the Second World War. When the Nazi Army first blitzkrieged across the fields and towns of Poland and France, Angell responded by joining Canada's Princess Pat Light Infantry Regiment.

Then when the United States of America entered the war, he transferred to the U.S. Army Infantry. In the North African desert campaign he fought as a rifleman with General Patton's Army against Rommel's Afrika Corps.

On D-Day, he went ashore during the 13th wave and fought in the hedgerows, fields and towns of France until mid-July when he was wounded by a sniper.

The smell of dust and grease wood hung heavy under the blazing desert sun, American soldiers searched the horizon through fear-strained eyes for the first cloud of dust that could betray a long, grey-green column of German Panzer tanks.

As the sun rose, young Sergeant Angell swore and sipped precious water. A quart canteen had to last twenty-four hours. That included drinking, bathing and cooking. A shave and a bath? Those were hollow words. If a man was wise, water was only taken in small sips, jealously guarded, perhaps shared with dying buddy.

All was quiet under the brassy-blue sky. On a rock near Angell, a sand-colored lizard stared into space, its scaly sides pulsing with each hot breath. From his spot in the rocks. Mick Angell heard a faint rustle among the dirty green bushes dotting the hillside. He strained his eyes and ears, wondering if it was a German. He eased his rifle towards the scrub brush and took careful aim.

About the Author, Eric Helm

Author Eric Helm is the pen name shared by two other novelists who are renowned for the Vietnam Ground Zero combat series. This particular Eric Helm wrote three of the 22 books: Red Dust, Cambodian Sanctuary and Spike. Originally published by Gold Eagle Books, the VGZ series are available as E-books by Sapere Books.

This particular Eric Helm is also the author of Wickham's Firefight. While his novels are traditionally published as paperbacks, this large-format trade paperback along with its taller typeface, combines to make for an easier read.